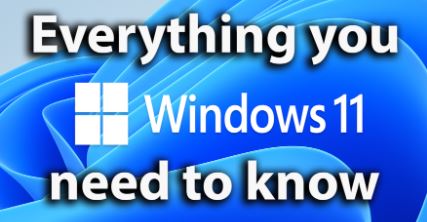 Windows 11 FAQ Everything you need to know

Windows 11 will be the name of the next major revision to Windows 10, different enough that it justified a new brand name and not just another feature update. This all sounds familiar…

When will I be able to get Windows 11?

Windows 11 was made available to Windows Insiders on June 28. General release to the public is slated for October.

If you’re wondering whether you’ll be able to opt out of Windows 11—the answer is, surprisingly, yes. Microsoft appears to be placing some substantial hardware requirements on Windows 11, and if your PC doesn’t meet them, you won’t be allowed to upgrade.

Will Windows 11 be free?

Some of you may be wondering what Windows 11 will cost. We’d expect the price for a standalone version of the operating system to be around the current price of Windows 10 i.e. £119.00 for Windows 11 Pro, although Microsoft are currently saying that Windows 11 will be a free upgrade to Windows 10. A Windows 11 subscription will also be included within 365 Business Plans.

Will there be different versions of Windows 11?

There’s a new user interface applied over the top of what still looks a lot like Windows 10. There’s a more compact, centred Taskbar and Start Menu. We also noticed updated icon designs and other visual tweaks. Another new feature of Windows 11 is the simplified starter menu. Gone with live tiles, and replaced by app icons, recently opened, and frequently used files. Due to Microsoft 365, files you have frequently opened on other devices will also appear here.

Furthermore, Windows 11 will bring a more agile multi-window feature. Similarly, to a Mac, Windows has introduced an easier way to access and organise multiple desktops and monitors. Additionally, snap layouts, a feature for easily arranging apps on your screen has also been improved. This is all due to Microsoft putting more focus on enabling productivity amongst users.

Windows 11 will also feature faster updates, claiming that most updates will be 40% smaller, and will happen in the background. There will still be larger updates, that cause disruption however, these will be reduced to once a year.

What does Windows 11 mean for Windows 10?

Microsoft has always said that it plans to end support for Windows 10 in 2025, and that’s still the case. If Microsoft sees Windows 11 as a replacement for Windows 10, and a free one, we’d expect your PC will upgrade to Windows 11 automatically, whenever Microsoft is ready to deploy the new operating system. The company has an update for Windows 10 scheduled for the second half of the year. Improvements will include Universal Print and Windows Autopilot. Beyond that its future roadmap is not clear.

What about that Microsoft policy that Windows 10 would be the “last Windows?”

As it turns out, that wasn’t exactly the case. We still believe, however, that Microsoft will keep updating and patching Windows, whatever it’s called. Windows is just Windows.

What are Windows’s 11 system requirements?

Windows 11’s hardware requirements are a major issue for Windows 11. You’ll need at least an 8th-gen Intel Core CPU or Ryzen 2000, and older processors are out of luck. Microsoft is even saying no to its older Surface devices.

After a lot of backlash, Microsoft tried to explain the reasoning for the new hardware requirements, which has come down to security. Microsoft is aiming to enable a more up-to-date BIOS (basic input/output system) that supports features such as Secure Boot and TPM 2.0 (trusted platform module). TPM chips, device encryption, HVCI (hypervisor-protected code integrity) and Secure Boot “has shown to reduce malware by 60 per cent” Windows claim. However, to support all these protections, you need modern hardware.

It is understandable why Microsoft decided to put more of a focus on security with this launch, as Microsoft’s operating system is known to have pitfalls when coming to protecting itself against Ransomware and Malware attacks.

Microsoft has confused companies by focusing on features aimed more at consumers than business. Advancements like a revamped user interface and the ability to run Android apps are not business priorities.